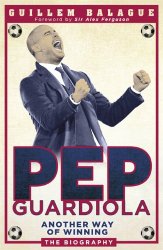 An entertaining biography of the former and hugely successful former manager of FC BarcelonaAs a footballer, Josep "Pep" Guardiola was a much-acclaimed defensive midfielder who spent the majority of his playing career with FC Barcelona. He was part of the great Johan Cruyff's "dream team" that won the club's first European Cup. After retiring as a player, Guardiola became a coach at Barcelona, succeeding Frank Rijkaard as first-team manager in 2008. In his first season, he led the team to the treble of La Liga, the Copa del Rey, and the Champions League, and became the youngest-ever winning manager of that tournament. The following season the club—comprised of global stars such as Lionel Messi, Xavi, and Iniesta—won six trophies in six competitions, playing some of the most fabulous football ever witnessed. This book tells how Pep Guardiola did it—playing the Beautiful Game and winning.

Do you want ot get the Pep Guardiola: Another Way of Winning?