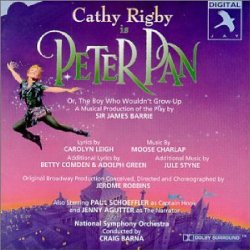 Mary Martin created Broadway's most famous "trousers" role in the original 1954 cast of Peter Pan, but former Olympic gymnast Cathy Rigby has proven to be a worthy successor. She earned a Tony nomination for the 1991 revival, has toured extensively, and starred in the 2000 video production. While the classic J.M. Barrie story of the boy who wouldn't grow up has seen many musical treatments (including Leonard Bernstein in 1950 and Disney in 1953), this version is probably the best known, with such Moose Charlap-Carolyn Leigh songs as "I Gotta Crow," "Tender Shepherd," "I'm Flying," and "I Won't Grow Up," plus some additional material by Jule Styne and Betty Comden and Adolph Green (most notably "Neverland"). It's a charming family show well represented in this 1997 recording featuring Rigby along with Elisa Sagardia (Wendy) and Paul Shoeffler (Hook). --David Horiuchi