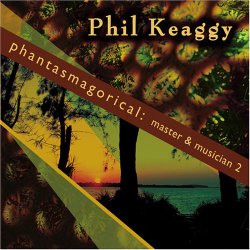 Upon the tail end of Phil Keaggy's most ambitious concert tour of his long and illustrious career - in which he has brought to life on stage his 1978 instrumental recording The Master & The Musician - Keaggy now releases his 2008 encore entitled Phantasmagorical: Master & Musician 2. Like the first, this album has musical scope and dimension that demonstrates Keaggy's mastery of melody within the ever-inventive musical signature guitars with a cornucopia of other instruments. "It is special to me because I have some really good friends on the album," states Phil. "It is not like a solo thing like what I've done with other albums where I am playing most of the instruments. It's a nice stirring in of other musicians." One of the other musicians happens to be Phil's son, Ian. "My son is on the album; which in itself makes this a special album to me. We wrote a song on the album appropriately titled "Father and Son". I also co-wrote two songs with one of the members of The Master and Musician Band, Tom Shinness. With recorders, clarinets, strings, bass, upright bass - a variety of different kinds of sounds and instruments - this does reminds me of The Master and The Musician," reflects Phil. On the present nation-wide tour, Phil Keaggy closes his concert with one of the new songs from Phantasmagorical: Master & Musician 2 entitled "Forever to Joy". The audiences have responded with great enthusiasm recognizing that as good as Phil Keaggy was 30 years ago - he is only that much the better in 2008.