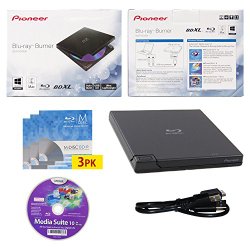 The BDR-XD05B is one of the world's smallest and lightest BD/DVD/CD portable burners supporting BDXL. The ultra-compact USB 3.0 drive can read and write to all BDXL discs1 including BD-R triple-layer 100GB media, BD-R quad-layer 128GB media, and BD-RE triple layer 100GB media, as well as conventional Blu-ray discs (single-layer 25GB media and dual-layer 50GB media). The portable device, measuring only 5.2" (W) X 0.55" (H) X 5.2" (D) and weighing a mere 8.46 ounces, also has the ability to be powered directly via USB (no AC adaptor required). The BDR-XD05B is bundled with CyberLink PowerDVDTM 12, PowerDirector® 10 LE, and Power2Go® 8. PowerDVD 12 delivers award winning playback software and will even upscale standard-definition content to high-definition quality. PowerDirector 10 LE allows you to import your home movies, edit them, and then upload them to social media sites. Power2Go 8 gives you the ability to burn your valuable files to Blu-ray (including triple and quad layer BDXL discs), DVD or CD media. With BDXL support, you can now back up your files with fewer discs than ever before, and since the drive is portable and USB bus powered, all of this can be done virtually anywhere. The BDR-XD05B can write up to 6x2 on BD-R and BD-R dual-layer (DL) media. One BD-R DL disc can hold the same amount of data as 10 DVDs (single-layer). One QL disc can hold the same amount of data as 27 DVDs (single-layer). The drive is also backward compatible to read and write to most DVD and CD recordable media. Click on the "Specifications" tab to see all supported media formats and the read and write/burn speeds achievable for each format.