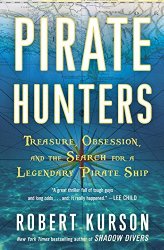 A thrilling new adventure of danger and deep-sea diving, historic mystery and suspense, by the author of the New York Times bestseller Shadow Divers   Finding and identifying a pirate ship is the hardest thing to do under the sea. But two men—John Chatterton and John Mattera—are willing to risk everything to find the Golden Fleece, the ship of the infamous pirate Joseph Bannister. At large during the Golden Age of Piracy in the seventeenth century, Bannister should have been immortalized in the lore of the sea—his exploits more notorious than Blackbeard’s, more daring than Kidd’s. But his story, and his ship, have been lost to time. If Chatterton and Mattera succeed, they will make history—it will be just the second time ever that a pirate ship has been discovered and positively identified. Soon, however, they realize that cutting-edge technology and a willingness to lose everything aren’t enough to track down Bannister’s ship. They must travel the globe in search of historic documents and accounts of the great pirate’s exploits, face down dangerous rivals, battle the tides of nations and governments and experts. But it’s only when they learn to think and act like pirates—like Bannister—that they become able to go where no pirate hunters have gone before.   Fast-paced and filled with suspense, fascinating characters, history, and adventure, Pirate Hunters is an unputdownable story that goes deep to discover truths and souls long believed lost.Advance praise for Pirate Hunters  “A great thriller full of tough guys and long odds . . . and: It’s all true.”—Lee Child  “Action and adventure on land and sea—you can’t ask for more. But Robert Kurson raises the ante in Pirate Hunters with an array of mystery and a fleet of colorful characters spanning four centuries. This is a great summer read!”—Michael Connelly   “Pirate Hunters is a fantastic book, an utterly engrossing and satisfying read. It tells the story of the hunt for the rare wreck of a pirate ship, which had been captained by one of the most remarkable pirates in history. This is a real-life Treasure Island, complete with swashbuckling, half-crazy treasure hunters and vivid Caribbean settings—a story for the ages.”—Douglas Preston   “A terrific read. I was pulled in from page one. Kurson brings us face to face with some of the most swashbuckling pirates ever to sail the Caribbean, even as he takes us underwater on a high-tech quest to discover the relics they left behind.”—Daniel James Brown   “There’s nothing in the world like buried treasure—and people hungry and obsessed enough to risk their lives for it. Pirate Hunters isn’t just a good story—it’s a true one. Searching for the souls of its explorers, it takes you to the far tip of the plank and plunges you deep to the bottom of the ocean.”—Brad Meltzer   “Pirate Hunters is a gripping account of two courageous divers’ quest to uncover the shipwrecked vessel of Joseph Bannister, one of history’s most infamous pirates. Robert Kurson will keep you on the edge of your seat in this high-stakes journey around the globe that ultimately teaches these explorers about much more than an old ship.”—Sen. John McCain   “Kurson’s own enthusiasm, combined with his copious research and an eye for detail, makes for one of the most mind-blowing pirate stories of recent memory.”—Publishers Weekly (starred review)