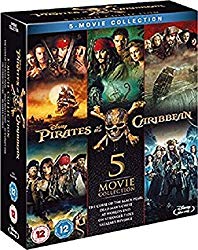 Do you want ot get the Pirates of the Caribbean – Complete Collection [Blu-ray]?