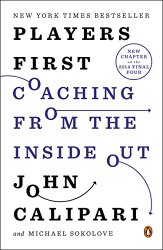 Now with a new chapter on the Wildcats' legendary comeback in the 2014 Final FourJohn Calipari, one of the most successful coaches in NCAA history, presents the world of college basketball from the coach's chair, unvarnished and straight from the heart. Players First is Calipari's account of his first six years coaching the University of Kentucky men's team, leading it to a national championship in 2012 and the championship game in 2014, all while dealing with the realities of the "one-and-done" mentality and an NCAA that sometimes seems to put players last. Filled with revelatory stories about what it takes to succeed at the highest level of the college game, Players First is a candid look at the great players and rivalries that have filled Calipari's life with joy and a sense of purpose.

Do you want ot get the Players First: Coaching from the Inside Out?