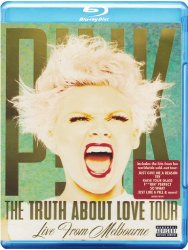 Hot off the heels of just being honored as Billboard's Woman Of The Year, receiving multiple Grammy nominations, and having played 140 shows in 13 countries around the globe, P!nk brings the sold-out tour and amazing spectacle of The Truth About Love Tour: Live From Melbourne to fans on DVD, Blu-Ray and digital long form on January 21, 2014. The 1 hour and 50 minute concert, which was conceived and executive produced by P!nk and Baz Halpin, was filmed during the Australian leg of the tour, in Melbourne. Pulling from her seven album repertoire, the show includes some of her biggest hits such as "Blow Me (One Last Kiss),"F***in' Perfect," "Try," "Raise Your Glass," "So What" and "Just Give Me A Reason" featuring Nate Ruess which was recently nominated for 2 Grammy Awards for the coveted Song of The Year category and Best Pop Duo/Group. The Truth About Love Tour: Live From Melbourne features the jaw-dropping theatrics and acrobatics that P!nk has become renowned for, collaborating with creative partner and show director Larn Poland (who also directed The Funhouse Tour: Live In Australia) to produce a visually stunning stage production that includes pyrotechnics, soaring stunts, and career-spanning hits.Tracklisting:1. Raise Your Glass2. Walk Of Shame3. Just Like A Pill4. U + UR Hand5. Leave Me Alone (I'm Lonely)6. Try7. Wicked Game8. Just Give Me A Reason featuring Nate Ruess9. Trouble10. Are We All We Are11. How Come You're Not Here12. Sober13. Chaos & Piss (Interlude)14. The Great Escape15. Who Knew16. Time After Time17. F**kin' Perfect18. Can't Take Me Home Medley19. Slut Like You20. Blow Me (One Last Kiss)21. So WhatBONUS FEATURES: The Truth About TourA Day In The Life Of RubixSlut Like You (Bluegrass Version)