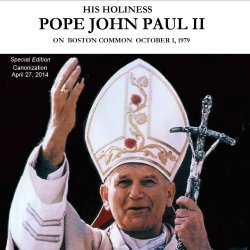 This recording features Pope John Paul II live on Boston Common on October 1,1979. Pope John Paul II will be Canonized a Saint on April 27, 2014. This is an Historic one of a kind recording featuring the entire Mass and Homily and a powerful message by Pope John Paul II, especially to the youth of the world. The largest live recording session in History with over 1.5 million people and was recorded and Produced live by Rik Tinory on Boston Common on October 1, 1979 and was endorsed by First Lady Rosalynn Carter for her husband President of the United States Jimmy Carter and Hollywood Actor comedian Bob Hope and his wife Dolores Hope as well as Senator Edward Ted Kennedy and countless other's This recording is a must for people of all faiths. including libraries, educators, Colleges, Institutions and the general public The recording opens with a spectacular version of America The Beautiful sung by over 1.5 million people. Available now on Amazon. com c Copyrighted 1979 by Rik Tinory Productions. All rights reserved. Copying in any form is a violation of Federal Copyright Laws.