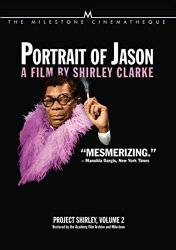 My name is Jason Holliday... The star of Shirley Clarke s unforgettable Portrait of Jason is black, gay, hilarious, heartbreaking and on screen for every one of the film s 107 minutes. The evening of December 3, 1966, director Shirley Clarke and crew filmed Jason for twelve straight hours as he told stories about his life, loves and work. At a time when it was illegal to be gay in the US, Jason spun extraordinary tales about his a career as a nightclub entertainer; his confrontations with his father; growing up in Trenton; and the many forms of hustling that comprised the basis of his existence. Jason may be the most self-revealing Scheherazade in the history of documentary films. Or is he? How much of what Jason says is true and how much is a fabulous performance? Even Clarke s filmmaking prevaricates Portrait of Jason was designed and painstakingly put together to look rough and entirely unedited. While all her films explored that porous border between cinema vérité and fiction Portrait of Jason, with its many ambiguities and contradictions, may well be Clarke s masterpiece. Milestone searched for three years to find the original elements for this definitive restoration of a landmark film. Provocative, groundbreaking and truly gripping, Portrait of Jason was one of the first LGBT films to be taken seriously by the general audiences and remains one of the most remarkable films in the history of American independent filmmaking. Features: PORTRAIT OF JASON (1967, B&W, 107:28 mins.) The Lost Confrontation. 7 mins) Where s Shirley? (25 mins) Jason in Color! (2:30 mins) Portrait of Jason trailer (2 mins) Jason: Before and After (1:30 mins) Butterfly (1967, 3:34 mins) Shirley Clarke in Underground New York (1967, 9:37 mins) Jason Unleashed (Audio outtakes. 35 mins) Pacifica Radio Interview with Shirley Clarke (1967, 53 mins) The Jason Holiday comedy album (1967, 54:00 mins, audio. Courtesy of Regina Longo) SDH Subtitles for feature