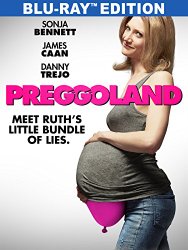 Preggoland “Hilarious! A comedy in the vein of BRIDESMAIDS.” (Scene Creek) When 35-year-old Ruth ruins a baby shower with her juvenile antics, her old high school cronies -- who are all mothers now -- promptly de-friend her. But when she is later mistakenly thought to be ‘with child’ she is inexplicably welcomed back into the group. Ruth plans on coming clean, but when her dad (James Caan) has a heart attack, Ruth decides to continue to fake the pregnancy. Things get even more complicated when Ruth falls in love with her new boss, who seems to wants nothing more than to raise her unborn children as his own. Can she get out of this without losing her job, friends, respect of her family and the new love of her life? Starring Sonja Bennett (who wrote the script), James Caan and Danny Trejo and directed by Jacob Tierney ("Good Neighbors," "The Trotsky"), "Preggoland" is a comedy about our societal obsession with babies and the lengths we’ll go to be part of a club.