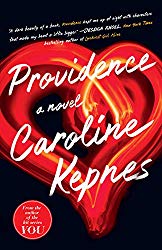 “Part love story, part supernatural thriller and completely engrossing” (People)—from the acclaimed author of You, now a hit Netflix series “A dark beauty of a book, Providence kept me up at night with characters that made my heart a little bigger.”—Jessica Knoll, New York Times bestselling author of Luckiest Girl Alive Best friends in small-town New Hampshire, Jon and Chloe share an intense, near-mystical bond. But before Jon can declare his love for his soul mate, he is kidnapped, and his plans for a normal life are permanently dashed. Four years later, Jon reappears. He is different now: bigger, stronger, and with no memory of the time he was gone. Jon wants to pick up where he and Chloe left off—until the horrifying instant he realizes he possesses strange powers that pose a grave threat to everyone he cares for. Afraid of hurting Chloe, Jon runs away, embarking on a journey for answers. Meanwhile, in Providence, Rhode Island, healthy college students and townies with no connection to one another are inexplicably dropping dead. A troubled detective prone to unexplainable hunches, Charles “Eggs” DeBenedictus suspects there’s a serial killer at work. But when he starts asking questions, Eggs is plunged into a shocking whodunit he never could have predicted.  With an intense, mesmerizing voice, Caroline Kepnes makes keen and powerful observations about human connection and how love and identity can dangerously blur together. NAMED ONE OF THE BEST BOOKS OF THE YEAR BY REAL SIMPLE “Providence is a novel that doesn’t fit into one box—it’s tender and dark, eerie and cool, heartbreaking but also an affirmation of the power of love. Kepnes perfectly captures each character’s struggle and pain in such a unique, unconventional way that every page—every sentence—is a delightful surprise.”—Sara Shepard, #1 New York Times bestselling author of Pretty Little Liars“Caroline Kepnes is cool right this minute. . . . [Providence is] terrifically conceived and executed. . . . Kepnes has an exhilarating, poppy, unexpected voice.”—The New York Times Book Review“An addictive horror-tinged romance that’ll keep you guessing.”—Entertainment Weekly

The Liar
Kitchen Gypsy: Recipes and Stories from a Lifelong Romance with Food (Sunset)
Tax-Free Wealth: How to Build Massive Wealth by Permanently Lowering Your Taxes (Rich Dad Advisors)
The Murder House
The Dead Play On (Cafferty & Quinn)
A History of Food in 100 Recipes