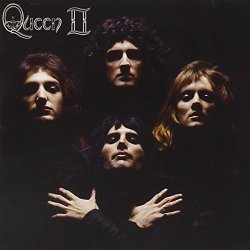 Deluxe two CD edition includes a bonus CD containing five additional tracks. Digitally remastered edition of the British Pomp Rock band's 1974 sophomore album. Queen II is the real beginning of Queen as we know it. It's the first time we hear the multi layered overdubs, the harmonies, the varied musical styles (ballads, Folk, Blues, Metal, Pop and Rock, it's all there). It also includes their first hit single 'Seven Seas of Rhye', which led to the first of many iconic performances on Top of the Pops. The band recorded Queen II in just over a month in 1973 ahead of its release in 1974. The album cover was shot by legendary photographer Mick Rock and inspired by a Marlene Dietrich portrait. The image was later brought to life in the revolutionary 'Bohemian Rhapsody' video.