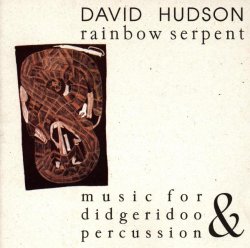 Rainbow Serpent is one of the most important recordings of Australian Aboriginal music ever made. David Hudson, master of the Aboriginal instrument known as the didgeridoo, combines with long-time collaborator and producer, Steve Roach, to create music from a 50,000 year tradition which maintains its heart and soul in the setting of a modern digital recording studio.Traditionally, the didgeridoo is capable of only one note, although numerous overtones of that note can be brought out and a wide variety of blowing techniques can sharply change the sound. In Rainbow Serpent, Hudson uses multiple didgeridoos, with simple percussion and some of Steve Roach's subtle digital processing, to create a unique recording that blends the most ancient musical sounds with the latest hi-tech sound devices.Rainbow Serpent is clearly rooted in the Aboriginal tradition. Hudson uses the traditional technique of circular breathing to keep the flow of music continuous and to maintain its meditative state. In this technique, the player forces air out of his mouth while breathing in through the nose. The sound is punctuated by a repertoire of traditional grunts and cries, representing different animal spirits. This album is also the work of a contemporary musician and composer. Hudson uses original calls and vocalizing techniques to striking effect on Laura's Festival. Eerie, deep spatial effects are created by the combination of didgeridoo and digital reverb on Undara's Lava Tube; and in Leprechaun Corroboree, Hudson uses Celtic sounding percussion patterns as accompaniment.Hudson's concluding piece is a spacey tour-de-force called New Beginning. Ringing harmonics, sweeping arcs of didgeridoos, and lonely bush sounds from Queensland, Australia, all inhabit the vast inner space of Steve Roach's digital studio environment. Rainbow Serpent is not a relic of ancient history, but a new Aboriginal music for the late 20th Century.

Do you want ot get the Rainbow Serpent: Music For Didgeridoo & Percussion?