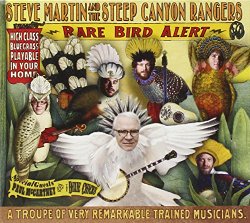 2011 album from Grammy and Emmy winning actor, comedian ,musician and bestselling author Steve Martin. On Rare Bird Alert, Steve is joined by the Steep Canyon Rangers, who toured extensively with Martin over the last year. Following the success of the Grammy Award winning The Crow: New Songs for the Five-String Banjo, Rare Bird Alert features 13 new Martin-penned tracks, including a live version of King Tut, and was produced by Tony Trishka. Sir Paul McCartney and The Dixie Chick make special guest vocal appearances on the album. Martin co-wrote two of the CD's songs with the Steep Canyon Rangers.

Do you want ot get the Rare Bird Alert?