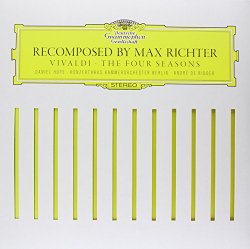 Composed in 1723, Antonio Vivaldis Four Seasons is arguably the most familiar piece of classical music in the world, and one of the most recorded pieces of all time.In a bold move characteristic of his boundary-pushing career, Max Richter has brought the quartet of baroque concertos firmly into the 21st century.Famed for his minimalist post-classical approach, incorporating electronica and found sounds, Richter controversially discarded most of Vivaldis score.Likening his work to that of a sculptor, Richter says he picked his favourite bits of the score and reshaped them into new objects, layering and looping familiar fragments to reinvigorate a work diminished by overuse in elevators, TV ads and as telephone holding music.I only kept about 25 per cent of the notes but theres Vivaldi DNA in all of it, says Max. I kept the gestures and shapes, the textures and dynamics. There are bits of Vivaldi and bits of me daydreaming about the original, thinking aloud about it.First released in Germany in 2012, Vivaldi Recomposed is the fifth in Deutsche Grammophons innovative series of collaborations between iconic musicians of the past and present. Previous Recomposed releases are by Matthias Arfmann (2005), Jimi Tenor (2006), Carl Craig & Moritz von Oswald (2008) and Matthew Herbert (2010).What Max Richter has achieved, though, with Vivaldi Recomposed is no mere arrangement - he has absorbed Vivaldis The Four Seasons into his own musical bloodstream.