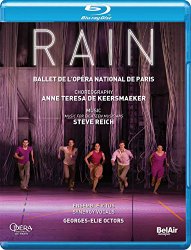 A Blu-Ray disc of the stunning 2014 performance choreographed by Belgian modern great Anne Teresa de Keersmaeker, performed by members of the Paris Opera Ballet and set to Music for Eighteen Musicians, Steve Reich's major score composed in 1976. In tandem with the score rendered here by Ensemble Ictus and the Synergy Vocals ensemble, Rain draws its spatial polyphony which manifests on the stage in a glorious pastiche of dancers and rhythm. Created by De Keersmaekers company, Rosas in 2001, Rain entered the Paris Opera Ballet's repertoire ten years later and reinforces her key role not just in the world of modern dance but in the worlds of contemporary art.

Spider-Man: Far from Home
1 The Movie (Formula One) [Blu-ray]
Once Upon A Time In The West [Blu-ray]
The Forbidden Room [Blu-ray]
20 Feet from Stardom [Blu-ray]
Fantastic Beasts and Where to Find Them (4K Ultra HD + Blu-ray + Digital HD)