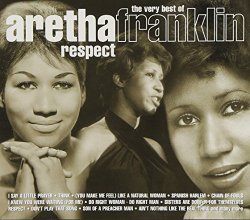 Import only two CD collection. Respect features all the classic songs by the original Queen of Soul, Aretha Franklin. Rooted in a gospel tradition that was to inform her soul-charged sound, her impact on American pop music was profound. It was the run of late-'60s Atlantic hits featured here ('Respect', 'Chain of Fools', 'I Say a Little Prayer') that made her a star, but as this Best of shows, there was plenty more to come. Aretha was discovered all over again by a new generation in the '80s thanks to her role and performance ('Think') in the hit musical the Blues Brothers. Riding high on a wave of success, duets with latter day icons followed like the epic "I Knew You Were Waiting" with stubble-faced George Michael and the anthemic 'Sisters Are Doing It for Themselves' with self-proclaimed diva Annie Lennox. Respect is certainly due to the remarkable talent of Aretha Franklin and this double disc anthology thoroughly represents the diva in her full majesty. Warner.

Do you want ot get the Respect: The Very Best of?