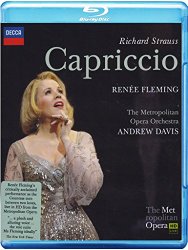 The central issue in Capriccio, happily, can never be resolved. The superiority of music over poetry, or vice versa, must always be a matter of personal preference. The Countess, not wishing to sacrifice one by choosing the other, proposes opera as a way to possess both. But this compromise, far from being a solution, sharpens a mere topic of conversation into a vexed confrontation for in opera the conflict of priorities between words and music is enacted with every performance. Those of us who work in opera are inevitably caught up in the battle.Capriccio is a conversation piece, concerned with ideas. Given that the issues embodied in these ideas are as alive today as they ever were, and that by performing the opera at all we are contributing to the argument, I wanted to find a way of doing it that would stress how contemporary it is. In a piece that is of necessity rather static, the eighteenth-century convention of paniered skirts and powdered wigs could easily lend to the proceedings an air of the museum. So often with Capriccio, one gets the impression of a group of silk and satin dilettantes idling their way affectedly through a vacuous afternoon, whereas the essence of the situation is a number of professional artists discussing their work with their patrons.However, unlike the ideas, the social circumstances embodied in Capriccio are not of the present. Where now do we find an elite wealthy and cultivated enough to patronise artists as extravagantly as the Countess and her brother do? The task was thus to find a time that would be true to the dramatic content of the opera.Paris in the decade after World War I had all that we needed. Patronesses like the Princesse de Polignac commissioned works from Stravinsky, Cocteau, the composers of Les Six, and others for private consumption. All of them were concerned with problems of form, many with finding new ways of combining words and music for the theatre. Diaghilev and Reinhardt bestrode the theatrical scene.Most of all, the relaxation of social behaviour found in the post-war period, with its ingenious emphasis on comfort that is not yet at the expense of elegance, seems to look back to the eighteenth century and forward to our own. It releases to the performer a rich vocabulary of gesture, posture, and moment-to-moment activity that is more accessible to both audience and actors, being much closer to their own, and that, therefore, can only assist in pointing the relevance of the conversation to us as we watch and listen.Those who find problematic the references within our text to eighteenth-century composers and writers should reflect that every age has its reformers and traditionalists. Names change but issues remain. Strauss, by claiming in his preface to Capriccio that he himself was the direct heir of Gluck s reforms, cleared the way for an exposition in words and music of his own compositional concerns. (As if to leave us in no doubt at all of this musical self-portrait, he even quotes frequently from his own work.) In short, everything Strauss represents was as true during his working life as it was in Gluck s most notably in the wholly twentieth-century figure of the theatre director La Roche.La Roche is anxious to people the stage with creatures of flesh and blood , people like ourselves with whom we can identify . This interpretation of Capriccio is an attempt to please him. John Cox10/2011Production: John Cox Set Designer: Mauro PaganoCostume Designer and Interior Décor: Robert PerdziolaLighting Designer: Duane Schuler Choreographer: Val CaniparoliStage Director: Peter McClintock Director: Gary Halvorson Host: Joyce DiDonatoMusical Preparation: Dennis Giauque, Vlad Iftinca, Steven Gathman, Jonathan Kelly, Patrick FurrerAssistant Stage Director: Gregory Anthony Fortner Stage Band Conductor: Jeffrey Goldberg