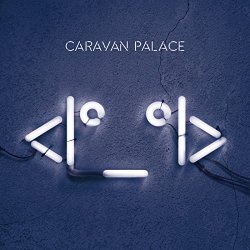 Caravan Palace will release Robot, their third studio album, on October 30th 2015. Created in their Parisian studios, where the electro-pioneers fuse hedonistic house and old school jazz to glorious effect, Robot evokes the spirit of a modernistic Quintette du Hot Club de France. The musical sound bed for the vocally explosive, burlesque blazoning Zoe Colotis is created by the band s three founder members Hughes Paven (violin), Charles Delaporte(upright bass) and Arnaud Vial (guitar), plus Camille Chapelière (clarinet) & Antoine Toustou (trombone and electronics) over the beats provided by Paul-Marie Barbier(vibraphone, washboard, piano). The result is a decadent, potent cocktail of jazz manouche, hip-hop, jive, house and beats that defies simple categorisation.The band s appeal has grown off-radar, appreciated for both their musical virtuosity and their sheer ability to deliver a ballistic good time.Having originally formed in 2005 the band s eponymous debut album in 2008 set the tone - a rip-roaring party, bursting with fun and good humour. This album went on to define a new sound called Electro Swing, while charting in their native France where it quickly attained a platinum sales award. The second album, 2012s Panic , featuring the massive tunes Clash and Rock It For Me remains a treat to listen to, whether in a burlesque bar or at home. Since its release the band s live profile has risen unrelentingly, their concert tickets flying out with minimum promotion and zero-hype across the USA, a true word-of-mouth sensation that earned them a spot at Coachella last year.With this new album, and the recent use of their music in a Diet Coke commercial, America is about to get very familiar with Caravan Palace.