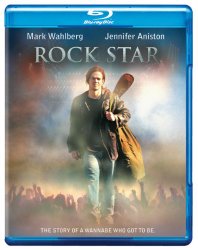 Rock Star (BD)Chris Cole (MARK WAHLBERG) was born to rock. His longtime girlfriend Emily (JENNIFER ANISTON) believes Chris's talent could take him all the way - but instead of writing his own music, Chris worships at the altar of Bobby Beers, the fiery frontman for Steel Dragon, the heavy metal rock legends that both inspire and consume his life. By day, Chris still lives at home with his parents and spends his days repairing copy machines, push-starting his sputtering Dodge Dart and fighting with his brother. But when Chris takes the stage, all of that disappears. When he's fronting Blood Pollution, Pennsylvania's premiere Steel Dragon tribute band, Chris Cole is Bobby Beers - mesmerizing audiences with his perfect imitation of Beers' electrifying vocals and sexy snarl. Blood Pollution's low-rent recreation of the Dragon's elaborate arena shows drive the locals (including Chris's loving parents and amused choir director) into a head-banging, hair-whipping frenzy. The night his bandmates boot him out of the group he founded, Chris is devastated - until an unexpected phone call changes his life forever: he, Chris Cole, has been tapped to replace Bobby Beers as the lead singer of Steel Dragon. In an instant, Chris rockets to the dizzying heights of sudden stardom, rising from devotee to icon, from the ultimate rock fan to the ultimate rock god - the wanna-be who got to be. So what happens when an average guy gets everything he wants... and discovers it's not enough?]]>