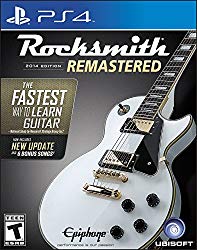 Rocksmith is the fastest way to learn guitar and bass. Join over 3 million players who have learned with the award-winning Rocksmith method. Like a personal guitar teacher, Rocksmith listens to you play and adapts to your skill level, slowly introducing more techniques and phrases until you're playing your favorite songs note-for-note. Rocksmith works with (A) any electric guitar or bass with a 1/4" output jack using the included cable, or (B) with any acoustic guitar or bass using a pickup with a 1/4" output jack or using a dedicated USB microphone (both not included). This Remastered version of Rocksmith was released in October 2016. It includes an update to the original Rocksmith 2014 Edition that adds a customizable learning curve, expanded practice tools, stat tracking, improved menus, six additional bonus songs, and more. If you already own the original Rocksmith 2014 Edition, the Remastered update can be downloaded for free and the additional songs can be purchased separately. Research Strategy Group Inc. - March 2013 - US nationwide in-home placement study Toluna Consumer Survey Songs: "Three Little Birds" by Bob Marley & The Waiters"Suspicious Minds" by Elvis Presley"Some Nights" by FUN"I Want You Back" by Jackson 5"Hey Ya!" by Outkast"Drops of Jupiter" by Train