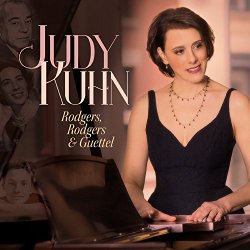 Three-time Tony Award-nominee Judy Kuhn delivers a master class on three generations of Broadway songwriters: Richard Rodgers, his daughter Mary Rodgers, and her son Adam Guettel. Drawn from Kuhn's sold-out American Songbook concert, Rodgers, Rodgers & Guettel gives Kuhn the opportunity to make musical and thematic connections that span generations. The elder Rodgers's classic "Hello, Young Lovers" is followed by his grandson's luminous song of love at it's purest "Hero and Leander"; pairing Oklahoma!'s "Oh, What a Beautiful Mornin'" alongside Floyd Collins's "The Call," Kuhn unearths an optimism - and a sound - common to both. And in a felicitous wedding of Richard Rodgers's "Nobody's Heart," Mary Rodgers's "Hey, Love" and Guettel's "Love to Me," Kuhn weaves a tale of love in it's many guises: disillusion that gives way to expectation, yearning that culminates in joy and fulfillment. Rodgers, Rodgers & Guettel features music direction by Todd Almond and orchestrations by Joshua Clayton, plus guest appearances by Malcolm Gets and Shuler Hensley. But the spotlight remains focused on Kuhn, whom The New York Times, in reviewing the evening at Lincoln Center, hailed as "a top-of-the-line singer whose approach might be described as one of passionate restraint... conveying as much insight and empathy as more overtly dramatic singers without straining for a show-stopping theatricality; her delivery is refined but not prim, her intonation impeccable."