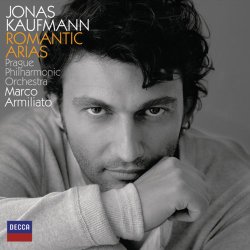 Jonas Kaufmann is without question the most versatile tenor of his generation, and his current repertoire includes an astonishing range of opera roles from Mozart to Wagner. He is also a celebrated Lieder interpreter, equally at home on the concert platform. His Decca Debut album celebrates a luscious range of Romantic opera arias, showcasing the astonishing diversity of his voice. Jonas Kaufmann has made stunning debuts in many of the world's leading opera houses in recent seasons. For example, to fabulous acclaim he appeared as Alfredo in La Traviata at the Metropolitan Opera and Chicago Lyric Opera - "smoothly burnished, beautifully focused... and always disarmingly musical" (New York Magazine). He was Don Jose in the 2007 new production of Carmen at the Royal Opera, Covent Garden - "superb" (The Guardian). Romantic Arias includes opera favorites by the Italian giants Verdi and Puccini, by French greats Berlioz and Bizet, and by Wagner, the epitome of German Romanticism. Kaufmann responds to each composer with seductive ease.

Do you want ot get the Romantic Arias?