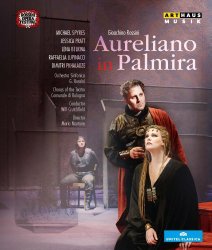 Gioachino Rossinis Aureliano in Palmira celebrated its first premiere on 26 December 1813 at La Scala in Milan. Soon afterwards the work was played in different theatres all over Europe. Nevertheless Rossinis piece fell into oblivion more and more compared to its great competitors like Tancredi or the Barber of Seville for which Rossini recycled musical parts of Aureliano. But the last few years have seen ambitions arise to perform this work about love, war, jealousy, loyalty and magnanimity more frequently. The direction in Pesaro as part of the 2014 Rossini Opera Festival was in the proven hands of famous film director Mario Martone. Conductor Will Crutchfield conducts the Orchestra Sinfonica G. Rossini and a cast of Rossini specialists including Michael Spyres and Jessica Pratt for this performance of the newly edited work. Michael Spyres as Aureliano showed immediately that his tenor with marvelous top notes has not only flexibility and agility, but also enough body to provide the Roman emperor great vocal authority. (Opernglas) The special bonus is a feature on the making of Aureliano in Palmira.