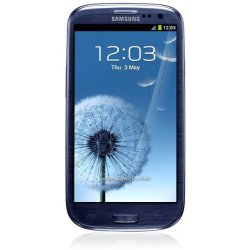 The Galaxy S III is powered by Samsung's Exynos quad-core 1.4GHz processor, which is based on the the ARM Cortex A9. It has a 4.8-inch super AMOLED screen with a resolution of 1280-by-720 pixels, which is housed in a shell that is 8.6 millimeters thick and weighs 133 grams. FEATURES: 4.8" Amoled HD screen The S3's enormous screen feels big in the hand, although the device is just 16 per cent larger than its predecessor, the 20 million selling S2. Smart Stay: The phone tracks your eyes, so as long as you're looking at it, the display won't dim or turn off. Direct Call: If you've got a contact on your screen, there's no need to hit call: simply hold the device up to your face and the number will be dialed automatically. Smart Alert: Burst shot and best photo The 8MP camera now offers a 20-shot burst mode and will choose the best photo for you. Photos are now possible at the same time as video filming. Face Zoom and Slide Show: Double tap a face to zoom in; automatic slide show generation zooms in on faces as individual pictures for pictures with lots of people. Social network and camera integration: Automatic tagging of pictures, and the option to send images directly to those identified in them, called Buddy Photo Share, or display social media profile information on screen. Group Tag lets you tag multiple people in one go, if you set up a group first. S-Voice: That's S for Samsung, not Siri. This feature allows you to control your phone through voice, eg to turn up the volume, and to ask it questions. S-Beam: High speed file transfer via NFC and WiFi Direct, between two phones touched together, operating at up to 300Mbps. Pop Up Play: Play video in a window on any homescreen. All Share Play and Cast: Share your S3's screen to a TV, or use the screen as a remote control.