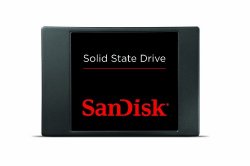 Improve the performance and extend the life of your computer.View larger Fast Performance for Multitasking and More Enhance and extend the life of your computer and enjoy fast, reliable performance with the SanDisk Solid State Drive. This SSD features a storage capacity of 128 GB (1) and delivers sequential read speeds of up to 475 megabytes per second (MB/s) and sequential write speeds of up to 375 MB/s (2). This allows you to multitask and transfer large files with ease, as well boot up your laptop or desktop computer more quickly than you can with a typical hard drive. Designed to Keep Your Data Safe Housed in a durable stainless steel case, and featuring a reliable solid state design, the SanDisk Solid State Drive has been engineered to resist shocks, vibrations, and extreme temperatures, preserve the integrity of your data, and prevent data loss. In addition, because SSDs typically use less power than hard disk drives, they put less strain on your computer system. Quiet, Stable Operation and Low Power Consumption Unlike traditional hard disk drives in computers, solid disk drives contain no moving parts, making them cooler and quieter and less likely to break. SSDs are also more energy-efficient than standard HDDs for longer laptop battery life. SanDisk SSDs are engineered to deliver sustained high performance over time. Sustained High Performance Rather than focus on peak speeds, which may be achieved only for a few seconds at a time, SanDisk maximizes real operating speeds and performance consistency over a long period of time. Thanks to a Mean Time Between Failures (MTBF) of 2 million hours (4), the SanDisk Solid State Drive can deliver years of fast, reliable performance, whether you're enjoying multimedia or transferring files at work. With this SSD, you can multitask and transfer large files with ease.View larger Faster Write Speeds and Safer Data with nCache Technology To optimize the user experience, the SanDisk Solid State Drive contains nCache--a large, non-volatile write cache that consolidates small writes to boost random write performance and the long-term data endurance of the drive. This proprietary technology from SanDisk is designed to mediate how modern-day operating systems and flash memory interoperate. The result is faster response times and better multitasking without stuttering. The SanDisk Solid State Drive is suitable for a laptop or desktop computer.View larger Reliable Performance with an Extended MTBF Like other SanDisk drives, the SanDisk Solid State Drive offers a Mean Time Between Failures (MTBF) of 2 million hours based on a parts stress analysis. MTBF is the predicted amount of time the drive will operate without failure and is a measure of reliability. This SSD monitors and provides updates on its health status.View larger Monitor the Health of Your SSD in Real Time Thanks to S. M.A. R.T. (Self-Monitoring, Analysis, and Reporting Technology) capabilities, this solid state drive can detect and report on various indicators of reliability and alert you of an impending drive failure while there is still time to take action. SSDs deliver cool, quiet operation and consume less power than typical HDDs. The Advantage of SSDs Why replace your computer's hard disk drive with a solid state drive? SSDs offer a number of advantages over traditional hard drives. Because they contain no moving parts, SanDisk SSDs are less likely to break, and they deliver cooler and quieter operation and consume less power than standard 7,200 RPM hard drives (3). In addition, the SanDisk Solid State Drive is cased in stainless steel and has been rigorously tested to withstand shocks and vibrations. This, along with fast read and write speeds for games and more, makes an SSD a compelling option, and it's easy to remove an HDD and install an SSD without losing any data. Legal Disclaimers (1) 1 GB = 1,000,000,000 bytes. Actual user capacity less. 1 GB = 1 billion bytes. Some capacity not available for data storage. (2) Up to stated speed. Based on internal testing; performance may vary depending upon host device, OS, and application. 1 megabyte (MB) = 1 million bytes. (3) As compared to 7,200 RPM SATA 2.5-inch hard drive. Based on published specifications and internal benchmarking tests. (4) Based on internal testing using Telcordia stress part testing.