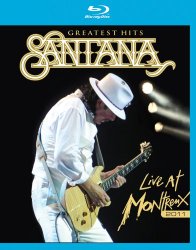 Santana were founded in the late sixties and came into the spotlight following their appearance at the Woodstock festival in 1969. Their eponymous debut album was released the same year and became a global success, introducing the public to the band's unique blend of latin rhythms and guitar based rock. With legendary guitarist and band leader Carlos Santana at the helm, hit albums and singles followed through the seventies, eighties, nineties and up to the present day. Both Carlos and the band have been frequent visitors to Montreux over the years and in 2011 they presented a stunning concert of their greatest hits, classic album tracks and brilliant cover versions from their debut album right up to 2010 s Guitar Heaven . This is the ultimate Santana live concert and absolutely not to be missed. / Special Guests include Susan Tedeschi, Derek Trucks and Cindy Blackman-Santana / Bonus Features:Interviews with the band / Behind the scenes / Track Listing:1) Spark Of The Divine 2) SOCC 3) Back In Black 4) Singing Winds, Crying Beasts 5) Black Magic Woman / Gypsy Queen 6) Oye Como Va 7) Maria, Maria 8) Foo Foo 9) Corazon Espinado / Guajira 10) Benny & Cindy Solo 11) Jingo 12) Carlos Speaks / Novus 13) Europa (Earth s Cry, Heaven s Smile) / I Want You 14) Batuka / No One To Depend On 15) Duende / Open Invitation 16) Make Somebody Happy / Right On Be Free 17) Evil Ways / A Love Supreme 18) Sunshine Of Your Love 19) Smooth / Dame Tu Amor 20) Soul Sacrifice / Dennis Drum Solo 21) Samba Pa Ti 22) Into The Night 23) Love, Peace And Happiness / Freedom