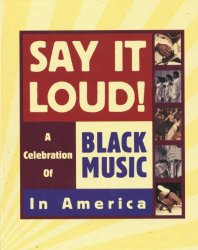 As with 1999's Respect box, which chronicled women recording artists, Rhino again attempts to capture and condense a mighty field with the six-CD Say It Loud! And again, it largely succeeds. A companion to the VH1 series of the same name, Say It Loud! tells one story and many. It covers the development of many related genres, the business of locking many outsize talents and personalities into the grooves of records, and the music as it mirrored a rustling, ever-changing society--that last underscored by the inclusion of spoken sound bites (everyone from Dr. Martin Luther King Jr. to Sammy Davis Jr.). But within these larger themes move many smaller but no less compelling tales. The roughly chronological programming allows for accidental, startling juxtapositions--disc one places Paul Robeson's pained, dignified reading of "Ol' Man River" just a few tracks away from bluesman Son House's insistence in "My Black Mama (Part 1)" that "there ain't no burnin' Hell." From there, pop ballads, big bands, bop, gospel, doo-wop, rock & roll, soul from Motown! Memphis! and Philly!, gorgeous civil-rights-era jazz, funk, and rap cohere and speak to one another in a selection about as good as can be expected given its length and various legal restrictions. (The most glaring omission is Stevie Wonder.) Any taint of "this stuff is good for you" is lost in the parade of great gifts, personalities, statements, dance crazes, poetry, and word games. If the above track listing contains lots of names you don't recognize, Say It Loud! will offer you a topnotch one-stop survey course. --Rickey Wright