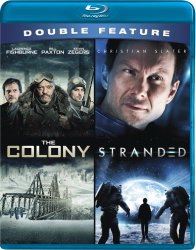 When the isolated U.S. military moonbase is bombarded by a rogue meteor storm, Colonel Gerard Brauchman (Christian Slater) and his small crew are cut off from Earth with their life support failing. Before long, the crew discovers the meteors harbored alien spores…and they’re replicating. Now a vicious, shape-shifting predatory life form is loose inside the crippled facility, picking off victims one by one. Locked in a desperate fight for survival, Brauchman and the terrified remaining astronauts have one final mission…keep the creature from escaping the moon and finding a new food supply on Earth. THE COLONY (2012, NR, 94 Mins) Laurence Fishburne (The Matrix), Bill Paxton (Aliens) and Kevin Zegers (Dawn of the Dead), headline an all-star cast in this savage and unrelenting thriller about mankind's greatest enemy: himself. As an endless winter engulfs Earth, humans struggle to survive in remote underground outposts. When Colony 7 receives a distress call from a nearby settlement, Sam (Zegers) and Briggs (Fishburne) race through the snow on a dangerous rescue mission. What they find at the desolate base could mean mankind’s salvation—or its total annihilation. Terrifying discoveries will unfold that will change the rules of survival forever. SCAVENGERS (2013, 94 Mins) The starship Revelator’s crew of deep space scavengers have just discovered something…an alien artifact of mysterious, unimaginable power capable of threatening the balance of the known universe. Fiercely pursued by a rival crew of mercenary killers, who know what the life-altering device can do, the crew fights to protect not only the artifact’s missing pieces, but find themselves battling for their lives and the very future of the universe itself. Sean Patrick Flanery (The Boondock Saints), Roark Critchlow (V) and Jeremy London (Party of Five) star in this adrenaline-fuelled sci-fi action-thriller. GATTACA (1997, PG-13, 106 Mins) As one of the last "natural" beings born into a genetically engineered world, Vincent Freeman (Ethan Hawke) has none of the "pre-ordered" DNA that will guarantee him success. Desperate to realize his dream of exploring space, Vincent assumes the identity of a genetically superior athlete's genetic markers, Vincent becomes a rising star at Gattaca Aerospace, attracting the attention of a stunning co-worker (Uma Thurman). But when a flight director is brutally murdered, a clue left at the crime scene threatens to shatter Vincent's plans in this riveting sci-fi classic.