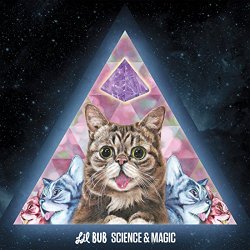 Lil BUB has had her paws in the music world for quite some time now. She's tight with Steve Albini, produced a single for Kelley Deal, worked closely with David Yow, collaborated with Andrew W.K., spearheaded 50 Bands and a Cat (she's the cat), been held by Jonathan Richman, has a song written for her by Kimya Dawson, was rapped about by Aesop Rock, enjoyed Thanksgiving dinner with Murder by Death, appeared in The Foo Fighters' HBO Documentary, "Sonic Highways", was the July, 2014 cover story for SPIN Magazine, and famously appears on Run the Jewels' highly anticipated "Meow the Jewels" record made up entirely of cat sounds. And now she's finally ready to blow minds with the very first full length concept album written by a magical space cat, and it's darn good. This is music made by a magical space cat. The songs on this album are the soundtrack to BUB's universal adventure, and a soundtrack to the universe itself. You'll feel transported by the music's stimulating spirit, and taken to places beyond your imagination's limits, all the while experiencing the sonic aura of BUB's loving and compassionate presence.