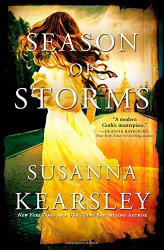 A mystery trapped in time In 1921, infamous Italian poet Galeazzo D'Ascanio wrote his last and greatest play, inspired by his muse and mistress, actress Celia Sands. On the eve of opening night, Celia vanished, and the play was never performed. Now, two generations later, Alessandro D'Ascanio plans to stage his grandfather's masterpiece and has offered the lead to a promising young English actress, also named Celia Sands-at the whim of her actress mother, or so she has always thought. When Celia arrives at D'Ascanio's magnificent, isolated Italian villa, she is drawn to the mystery of her namesake's disappearance-and to the compelling, enigmatic Alessandro. But the closer Celia gets to learning the first Celia's fate, the more she is drawn into a web of murder, passion, and the obsession of genius. Though she knows she should let go of the past, in the dark, in her dreams, it comes back...

Do you want ot get the Season of Storms?