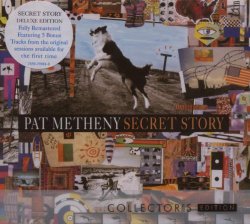 The New York Times called Pat Metheny's 1992 Grammy Award-winning Secret Story the most sweepingly ambitious album that the jazz guitarist has yet recorded...a nearly 80-minute world-music suite with symphonic underpinnings. If the album functioned then, in the words of critic Stephen Holden, as part travelogue and part soundtrack for a nonexistent film, then this expanded and re-mastered edition can best be described as the director's cut. Composer and guitarist Metheny revisited and restored five previously unreleased tracks in the studio over the last year, and he's collected them on a bonus disc. More pastoral in tone than most of the original material on Secret Story and with a decidedly cinematic, orchestral feel these tracks are like the deleted scenes from a deeply evocative yet wordless narrative feature. Back in '92, Metheny declared that Secret Story was unlike anything I've ever done. It's the largest in scope - 80 people were involved in the record - but it's also the most intimate record I've done.

Do you want ot get the Secret Story 2CD Special Edition?