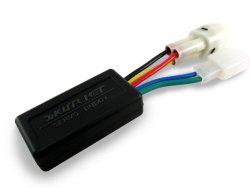 THE ULTIMATE SOLUTION FOR AFTERMARKET EXHAUST INSTALLATION The Servo Buddy by SkutrNet eliminates the hassle associated with removing the exhaust servo motor simplifying the process of installing an aftermarket exhaust. The Servo Buddy works by mimicking the servo motor so the computer thinks all is well with the exhaust circuit preventing the FI light from coming on due to exhaust faults while still keeping its functionality to warn you if anything else is wrong with the bike! Simply disconnecting the FI light or putting tape over it could mask potentially serious problems and lead to a damaged engine. ENGINEERED FOR ALL RIDING CONDITIONS SkutrNet's Servo Buddy is made to meet military or automotive standards ensuring it will work from the street to the racetrack and everywhere in between. The Servo Buddy uses OEM connectors to easily connect to your bike and weighs less than an ounce! The servo buddy allows you to remove the bulky servo motor eliminating unnecessary weight.