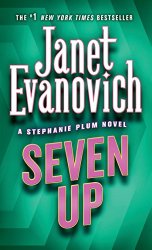 Experience the bestselling phenomenon that is sweeping the nation!#1 New York Times#1 Wall Street Journal#1 Entertainment Weekly#1 Publishers Weekly#1 Booksense#1 Los Angeles TimesBLOWN UPAll New Jersey bounty hunter Stephanie Plum has to do is bring in semi-retired bail jumper Eddie DeChooch. For an old man he's still got a knack for slipping out of sight--and raising hell. How else can Stephanie explain the bullet-riddled corpse in Eddie's garden? Who else would have a clue as to why two of Stephanie's friends suddenly vanished? For answers Stephanie has the devil to pay: her mentor, Ranger. The deal? He'll give Stephanie all the help she needs--if she gives him everything he wants . . .MESSED UPAs if things weren't complicated enough, Stephanie's just discovered her Grandma Mazur's own unmentionable alliance with Eddie. Add a series of unnerving break-ins, not to mention the bombshell revelation leveled by Stephanie's estranged sister, and Stephanie's ready for some good news. Unfortunately, a marriage proposal from Joe Morelli, the love of her life, isn't quite cutting it. And now--murder, a randy paramour, a wily mobster, death threats, extortion, and a triplie kidnapping aside--Stephanie's really got the urge to run for her life . . .SEVEN UP

The Cartoon Guide to Statistics
Mazda MX-5 Miata: Twenty-Five Years
Men’s Health Muscle Chow: More Than 150 Easy-to-Follow Recipes to Burn Fat and Feed Your Mu...
Radical Compassion: Learning to Love Yourself and Your World with the Practice of RAIN
Toyota Kata: Managing People for Improvement, Adaptiveness and Superior Results
The Blood Mirror (Lightbringer)