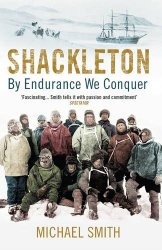 Ernest Shackleton is one of history's great explorers, an extraordinary character who pioneered the path to the South Pole over 100 years ago and became a dominant figure in Antarctic discovery. A charismatic personality, his incredible adventures on four expeditions to the Antarctic have captivated generations. He joined the Empire’s last great endeavor of exploration: to conquer the South Pole with Scott on the Discovery expedition. A clash with Scott led to Shackleton being ordered home and started a bitter feud between the two. Shackleton's riposte was the Nimrod expedition, which uncovered the route to the Pole and honed the leadership skills that later encouraged men to overcome unimaginable hardship on the Endurance expedition of 1914. But Shackleton was a flawed character whose chaotic private life, marked by romantic affairs, unfulfilled ambitions, and failed business ventures, contrasted with celebrity status as the leading explorer. Persistent money problems left his men unpaid and his family with debts.Drawing on extensive research of original diaries, letters, and many other publications, Michael Smith brings a fresh perspective to the heroic age of Polar exploration, which was dominated by Shackleton's complex, compelling, and enduringly fascinating story.

Stick Dog Dreams of Ice Cream
Joshua Jay’s Amazing Book of Cards: Tricks, Shuffles, Stunts & Hustles Plus Bets You C...
Near & Far: Recipes Inspired by Home and Travel
The Back of the Napkin (Expanded Edition): Solving Problems and Selling Ideas with Pictures
The Populist’s Guide to 2020: A New Right and New Left are Rising
Diagnostic Parasitology for Veterinary Technicians, 4e