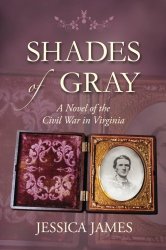 Award-Winning and Amazon #1 Best Selling Author “It is a book that I think could have the impact of a ‘Gone With the Wind.’’ ” – J. Noyalas, Assistant Professor of History“I think it is the best Civil War fiction book since Cold Mountain.” – James D. Bibb, Sons of Confederate Veterans, Trimble Camp 1836“A classic love story as much as it is a war story.” – Civil War Book ReviewHonor and conviction clash with loyalty and love in this epic Civil War love story that pits brother against brother. (This novel now has a happily-ever-after ending and is called NOBLE CAUSE).Shades of Gray chronicles the clash of a Confederate cavalry officer with a Union spy as they defend their beliefs, their country, and their honor. Called "a riveting piece of historical fiction," by the Midwest Book Review and often compared to Gone with the Wind, this novel takes readers across the rolling hills of Virginia in a page-turning tale of courage and love.Gallantry and chivalry are put to the test when Colonel Alexander Hunter discovers the woman he promised his dying brother he would protect is the Union spy he has vowed to his men he would destroy. Readers will discover the fine line between friends and enemies when the lives of these two tenacious foes cross by the fates of war and their destinies become entwined forever.Awards Won by Jessica James2014 Sheila Award Finalist, Valley Forge Romance Writers2014 John Esten Cooke Award for Southern Fiction2014 Reader's Crown Award Finalist2014 Next Generation Indie Award Finalist in Fiction/ReligiousUSA Best Books 2013 Finalist in Fiction/Religious2012 Foreword Magazine Book of the Year (Bronze) in Romance2011 John Esten Cooke Award for Southern Fiction2011 USA Best Books 2011 Finalist in Historical Fiction2011 Next Generation Indie Award for Best Regional Fiction2011 Next Generation Indie Finalist in Romance2011 Next Generation Indie Finalist in Historical Fiction2011 NABE Pinnacle Book Achievement Award2010 Stars and Flags: 2nd place for Historical Fiction2009 HOLT Medallion Finalist for Best Southern Theme2008 Indie Next Generation Award for Best Regional Fiction2008 Indie Next Generation Finalist for Best Historical Fiction2008 IPPY Award for Best Regional Fiction2008 ForeWord Magazine Finalist for Book of the Year in Romance“This stunning story captures the reader's attention from the start. A moving account of two people who are drawn into an untenable conflict and find love, despite their opposing beliefs.” – Romantic Times“Readers will find the attention to historical detail impeccable and the characters are strongly drawn.” – Foreword Magazine