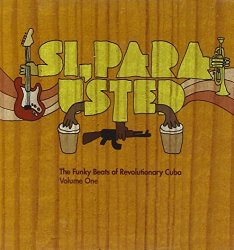 Waxing Deep Records is pleased to announce the first ever compilation of Cuban funk: Si, Para Usted: The Funky Beats of Revolutionary Cuba, Volume One. An unprecedented combination of socialism and artistic freedom flourished during the mid-years of Castro's Cuba, enabling musicians to create an innovative body of music based on traditional styles like those made famous by the Buena Vista Social Club. Si, Para Usted captures the spirit of this time. The music ranges from son, beat, jazz, and funk, and abounds with psychedelic influences, electronic experimentation, and a heavy dose of soul. Communist funk may seem unlikely, but here it is. Si, Para Usted was lovingly compiled by Dan Zacks of Waxing Deep Radio in response to massive listener demand for the Cuban music played on the show. Outside of the Waxing Deep archive, the bulk of funky Cuban music is virtually unobtainable. Cuban recordings were never widely distributed and few have been reissued. Utterly committed to sharing good music, Dan took it upon himself to make these fantastic tracks more widely accessible. Almost all of the tracks were re-mastered from the original tapes kept by the Cuban government in a dusty Havana warehouse. Given the poor quality of Cuban vinyl, this means the music on Si, Para Usted has a quality of sound previously unavailable. Quite simply, the music has never sounded this good.

Do you want ot get the Si Para Usted: Funky Beats Revolutionary?