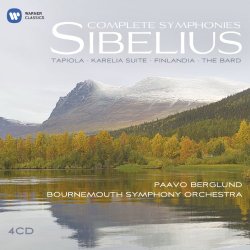 EMI Classics releases an exclusive 4-CD collection honoring the career of Finnish conductor Paavo Berglund who died earlier this year at the age of 82. Best known for his interpretations of Jean Sibelius s symphonies, the set features all seven symphonies the core of Sibelius s complete works. This collection also contains a number of tone poems ranging from his early Karelia Suite to his final completed work, Tapiola, and is truly a magnificent introduction to this masterly composer. Berglund leads the Bournemouth Symphony Orchestra in these historical recordings that have been unearthed from the archives after a long period of not being available. Berglund studied the violin and by 15 had decided to make his career in music, gaining experience from playing and restaurants and dance orchestras. In 1949 he joined the first violin section of the Finnish Radio Symphony Orchestra. He was greatly impressed by Furtwängler when he brought the Vienna Philharmonic to Helsinki and he was soon studying in Vienna where his friends in the orchestras allowed him access to rehearsals and recording sessions. He formed his own chamber orchestra in 1949 and co-founded the Helsinki Chamber Orchestra four years later. In 1955 he started his long association with the Finnish Radio Symphony Orchestra first as Associate Conductor and then Chief Conductor. It was a series of Sibelius Centenary Concerts in 1965 that brought him to Bournemouth, becoming the principal conductor of the city s Symphony Orchestra in 1972 and over the next seven years made numerous recordings including the ones found in this collection.

Heart Of A Dog
Scary Sounds of Halloween
Without Hesitation
Bija: Soothing Music and Mantras for Yoga and Relaxation
The Wizard Of Oz: 1998 Cast Recording (Madison Square Garden Cast)
Fatou