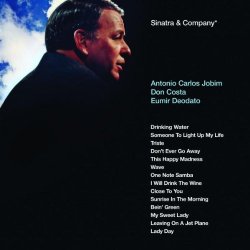 Out of print in the U.S.! Originally released in 1971, the first side of Sinatra & Company consists of unreleased recordings he made with Antonio Carlos Jobim in 1969. Side Two of the album is closer to standard Sinatra fare, containing seven great tracks slickly produced by Don Costa. While the Rock and Pop artists of the day dominated the charts, Francis Albert Sinatra was able to create unique albums that were above and beyond the standard fare released by his easy listening contemporaries. Sinatra stepped out and did what he wanted, never content to just stand in front of a microphone and knock out a set of uninspired drivel. Universal. 2009.

Do you want ot get the Sinatra & Company?