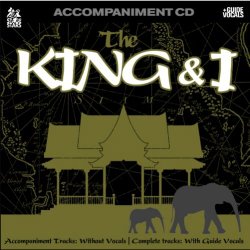 This album features songs from the classic Broadway musical, The King & I. Based on Margaret Landon's novel, Anna & the King of Siam, this Richard Rodgers and Oscar Hammerstein musical won five Tony Awards in 1952. Yule Brenner won a special Tony award in 1985, honoring his appearance in 4,525 performances of The King & I. There are 22 tracks on this album: Tracks 1-11 contain the background tracks and guide vocals; tracks 12-22 contain the background tracks alone. These albums are re-recordings in the original show key and show tempo. There are no on-screen lyrics or lyric booklet provided.

Do you want ot get the Sing The Broadway Musical The King & I (Accompaniment CD)?