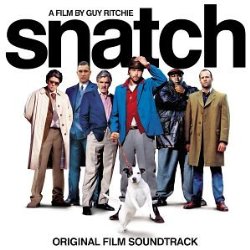 Though a well-publicized marriage did much to raise his celebrity profile, Guy "Mr. Madonna" Ritchie's claim as one of the world's most promising young filmmakers was already secure. Extending the gambit he began on Lock, Stock and Two Smoking Barrels, the English director's handpicked collection of pop songs for his jewel heist romp Snatch is a dizzying delight that eschews era and genre concerns in favor of flavorful character and loopy fun. Though his musical sense is one of the elements that have inspired Tarantino comparisons, Ritchie is clearly a league of one here. With a little fresh input from musical ally Klint, this anthology score ranges from the electro club mixes of Overseer and Mirwais to the vintage R&B workouts of Maceo Parker, Huey "Piano" Smith, and Bobby Byrd, with some pop kitsch of the 1970s (Johnston Brothers' "Hernando's Hideaway") and '80s (the missus's "Lucky Star") to keep the proceedings ever fresh and askew. Ritchie's pop choices are no less inspired, from Oasis and Massive Attack to the Specials' classic, "Ghost Town," and The Stranglers' own underrated jewel, "Golden Brown." --Jerry McCulley