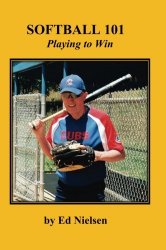 The goal of this book is to serve as a refresher for those who know the fundamentals, and to serve as a primer for those who don’t. While intended to show slow-pitch softball players how to improve their game, this book will be helpful to fast-pitch softball and baseball players as well. After all, most of the principles in this book apply to any game played on a diamond, from Little League to high school and adult softball leagues to the Major Leagues. Most of us will encounter opposing players who can run faster, hit harder, and throw further than we can. But that doesn’t mean we have to concede victory. Maybe we can run fast longer, hit more consistently, and throw more accurately. If you’re willing to learn and invest in some off-field training, you can often overcome superior athletic skills possessed by the opposition. This book is intended to give you the tools needed to amplify your natural skills. I have played organized ball for over 60 years and, fortunately, I got off to a good start, thanks to fundamentals instilled in me from the very beginning. I began playing organized baseball in early grade school and continued playing summer baseball for the next 10 years under the tutelage of legendary Iowa coach George Engebretson. George coached baseball in the ultra-small town of Rembrandt (200 souls). Nearly every team his charges played against came from much larger towns, yet George’s teams were nearly always victorious because he had his players so well grounded in fundamentals. Opposing teams were seldom so well taught. Thus, even when an opposing team had superior athletes, as was often the case, George’s team was still dominant. I also played high school baseball for some excellent coaches. Those coaches had an easier job than most because George had already smoothed the rough edges of all the players. Let me hasten to add that those high school coaches taught us quite a bit, too, but they didn’t have to start at square one, thanks to George. Coaches Hulsebus, Skogerboe, and Rath could focus on the more advanced nuances of the game and they did a wonderful job. Following high school, I didn’t play organized ball while working my way through DeVry Technical Institute (now DeVry University) in Chicago. Once I had graduated there and settled into a career, I resumed playing ball, this time softball, and have played almost continuously ever since. In the 2013 National Senior Games, my team won gold medals in our age group; three teammates and I were selected as All-Americans (wish George was still around to see that!). I often see players who were never taught the proper fundamentals of playing ball or, if they were, the lessons never stuck. For every player I see fitting that description, I’d wager they cost their team about a run per game, on average. That could get very expensive if there is more than one of those players on a team, especially if their opponents have no such handicap. The first chapters of this book will describe the things that a player should do automatically while playing softball. Succeeding chapters will suggest things a player can do to improve his game when not on the field, things I believe will help any player enhance his natural abilities. Incidentally, please excuse my apparent sexism in this volume. I realize that females play softball and will read this book, too, hopefully. When you see masculine pronouns, I’m just trying to keep it simple. That makes it so much easier than using something like “he/she” or some other gender-neutral term. Rest assured that I’m directing my thoughts to both sexes. Softball is one athletic endeavor in which you can participate almost your entire life. With the growth of senior softball, there’s really no reason to hang up your cleats until physical infirmities arise, but even those often can be forestalled with proper conditioning. I hope this book helps you enjoy even more the game we all love.

Do you want ot get the Softball 101: Playing to Win?

Everybody Poops 10 Million Pounds: Astounding Fecal Facts from a Day in the City
The Handbuilt Home: 34 Simple Stylish and Budget-Friendly Woodworking Projects for Every Room
Practice Perfect Baseball
Confessions (Oxford World’s Classics)
The Odd 1s Out: How to Be Cool and Other Things I Definitely Learned from Growing Up
Then She Was Gone: A Novel