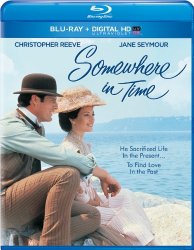 Christopher Reeve and Jane Seymour star in the timeless love story of a young writer who sacrifices his life in the present to find happiness in the past in Somewhere in Time. After one of his plays, Richard Collier (Reeve) is approached by an elderly woman (Seymour) who gives him an antique gold watch and pleads with him to return in time with her. Years later, when Richard sees a photograph of a beautiful young woman at the Grand Hotel, he realizes she is the same woman who had approached him and becomes obsessed with returning to 1912 to find her. Co-starring Christopher Plummer and Teresa Wright, this romantic fantasy is an unforgettable story of passion, obsession and love that will live on forever.