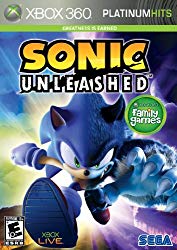 "Sonic the Hedgehog is on an adventure unlike any other! Powered by an all-new engine, Sonic Unleashed merges classic Sonic gameplay with the latest in next-generation innovation. Merging blistering 2D action with meticulously rendered 3D environments, players race through intriguing locations across the globe as Sonic to save a chaotic world. On a quest for domination once more, Dr. Eggman unleashes a slumbering beast from the center of the world. The event causes a devastating tremor that splinters the world into seven continents and triggers a hair-raising transformation in Sonic. With the world divided and Sonic altered with new abilities and powers, the stage is set for a climactic battle. For when the sun sets, a whole new adventure awakens!"