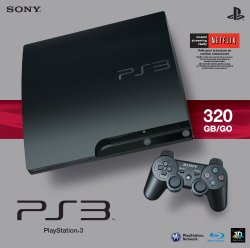 The PS3 system is now slimmer and lighter than ever before. While the form factor may have changed, the PS3 system still comes with free access to the PlayStation Network, built-in Wi-Fi, and hard disk drive storage for games, music, videos, and photos. Plus, the PS3 system is the only gaming console with a Blu-ray player to give you the best high-definition viewing experience on your television. With five times the capacity of standard DVDs, Blu-ray discs gives you more realistic and immersive gameplay that can only be possible on the PS3 system with games such as Gran Turismo 5, Uncharted 2: Among Thieves Game of the Year, and MAG. All PlayStation 3 systems are already equipped with everything you need to play stereoscopic 3D games.