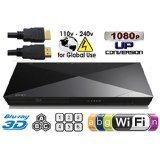 Works on any TV with HDMI connection. Now, watch all your favorite DVD's in from any part of the world. BD ABC / DVD: 0123456 with full HD 1080p Watch full HD Blu-ray movies in 2D or 3D with the Sony BDP-S5200 Wi-Fi and 3D Blu-ray Disc Player. This 3D Blu-ray player supports full HD 1080p Blu-ray disc playback from its HDMI output, and can also upscale DVDs to near HD quality. This model also features the Sony Entertainment Network (SEN), which gives you access to over 200 streaming services such as Netflix, Pandora, Hulu Plus, and YouTube. Ethernet and 802.11n Wi-Fi are built into the player for high-speed Internet connectivity. The HDMI output supports high-resolution audio formats such Dolby TrueHD and DTS-HD Master Audio for a dynamic surround sound experience. The BDP-S5200 also has a digital coaxial audio output for compatibility with non HDMI-equipped components. The Blu-ray player's USB port allows you to connect peripherals such as thumb drives for easy playback, and supports a variety of file formats. With the free Sony SmartView app you can control the BDP-S5200 Blu-ray player from portable devices such as smartphones and tablets. 3D Playback When connected to a 3D HDTV via HDMI, the Sony BDP-S5200 can play back 3D Blu-ray discs. Additionally, this Blu-ray player can convert 2D content like DVDs to 3D. Sony TRILUMINOS Display Technology Sony TRILUMINOS Display technology is designed to enhance image depth and realism while optimizing color reproduction. Mirror Your Mobile Device When used with a Miracast-enabled smart device you can wirelessly stream the display of your portable device directly to the BDP-S3200 Blu-ray player for output to your connected TV. Mobile Device Control With the free Sony TV SideView app, you can control your player and browse content from your mobile devices. Use the Throw feature to wirelessly share videos, pictures, and music between compatible mobile device(s) and your TV.