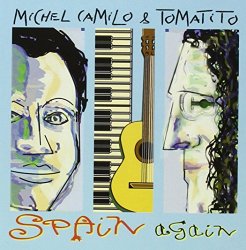 When talents as formidable as Michel Camilo & Tomatito get together to make music it is an event. These two distinct voices from different musical worlds reunite on Spain Again, a scintillating musical conversation between two masters. Camilo, a brilliant pianist and prolific composer, is renowned for combing rich jazz harmonies with the Caribbean flavors and rhythms of his native Dominican Republic. Discovered in his native Spain at an early age, Tomatito is the premier flamenco guitarist of his generation and has accompanied Spain's greatest flamenco singers including the legendary Cameron de la Isla. Navigating the boundaries of jazz and flamenco, Camilo & Tomatito create an experience that is both unique and unforgettable. Camilo made his recording debut in 1985, when he recorded Why Not? (released on Japan's King label). in 1988, he made his American recording debut with the self-titled Michel Camilo (released on Portrait/Epic). Several more critically-acclaimed albums (released on Epic and Columbia) followed including, on Fire, on the Other Hand, Rendezvous and One More Once, Thru My Eyes and Concerto for Piano & Orchestra (released on Universal) as well as Triangulo, Live at the Blue Note, Solo and Rhapsody in Blue (released on Telarc). He has been honored with numerous awards, including a Grammy®, a Latin Grammy® and an Emmy® Award. in the All Music Guide to Jazz, critic Scott Yanow describes Camilo as one of the most stimulating jazz pianists to emerge in the mid-to-late 1980s.