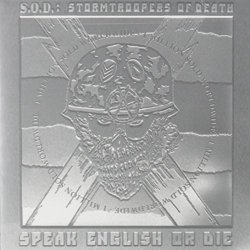 One of the crucial links in the musical chain linking hardcore punk with speed metal, theStormtroopers of Death - known more commonly as S.O.D. - were actually intended to be a one-offnovelty side project, done as a lark during a gap in Anthrax's recording and touring schedule in 1985.Guitarist Scott Ian and drummer Charlie Benante were joined by former Anthrax bassist Dan Lilker(then in Nuclear Assault) plus Anthrax roadie Billy Milano on vocals. Ian and Milano had recorded ahyperspeed demo for the project under the name Crab Society North. The resulting album, Speak English or Die, was recorded in three days and released later that year,and it gained as much notoriety for its silly, sometimes racist and sexist humor as it did for its rawmusical power. The group played a small number of concerts, after which the musicians returned totheir full-time projects and Milano went on to form M.O.D. S.O.D. had ostensibly been put on permanent hiatus, but a dedicated cult following grew around