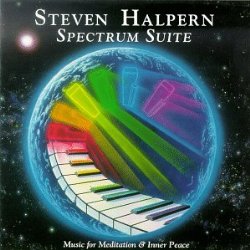 Steven Halpern is a seminal figure in New Age music, pioneering the market back in the 1970s, long before the major labels got hold of it. His merchandising touts the healing attributes of his music, which he dubbed the "anti-frantic alternative." According to Halpern, his sounds will tune your aura, massage your chakras, and stop you from smoking. His theories have been largely debunked as pseudoscientific, quasi-metaphysical fluff, (see Lisa Summer's book, Music: The New Age Elixir), which brings us to his first album, Spectrum Suite, originally released in 1975. Its 14 compositions float by in major-key improvisations that never resolve. Instead, he sends notes out into the clear air, the vibraphone-like tones of his Fender Rhodes electric piano resonating like bells in space. You don't follow Halpern's music, but float through it. More rhapsodic than Brian Eno's ambient compositions of the same era, Halpern would be a pleasant diversion if he didn't weigh his music down with so much New Age baggage. --John Diliberto